Thanksgiving is just around the corner. It is a time to reflect on  all the many things for which we are thankful. I quite vividly remember hunting season also at this time of the year.  We always waited until after the first frost as it seems the game tasted better then. Dad taught us at about age twelve how to hunt with much emphasis on safety. We walked the field and woods in a firm line so no one ran the risk of being shot accidentally. As we got older, Thanksgiving morning was a special hunting experience with several other guys our age from nearby farms. It was an annual tradition and one that I cherish. Most of the fun was a brisk hike on a cold morning, laughing and have a good time together. Thanksgiving dinner was usually early evening just after the animals were fed.

It is October and in Pennsylvania, change is on the way. The air is cooler, the leaves are becoming bright colors and the scenes are more than beautiful. Fall temperatures drop lower overnight with the possibility of frost becoming very real and a sweater feels good. The fun of ripe apples, cider making, the turnip patch and hunting season are just around the corner. Memories of the days of October on the farm where I grew up are strong no matter where in the US I have lived.

Potatoes were one of very last crops of the season. In Pennsylvania, it is time to dig them now!! We used what would be considered an antique piece of equipment. It could be pulled by either horses or a tractor. The blade in the front slid into the ground just below the potato crop, unearthing them from where they went up a chain like shaker to remove the soil from the potato. They then dropped out the back and we kids with our baskets or buckets followed along picking up the harvest. By now, the weather was cool, often a frost had already hit the area, and it was a more fun job than some of the other chores we had to do. Perhaps it was because we all liked and ate a lot of potatoes  -  crispy fried in lard, boiled, mashed and baked. If you have a question or would like to hear more, my email is: tomdeimler@me.com

This a great time of the year for delicious peaches. When they are nice and ripe the skin will peel off in one piece. The flavor is outstanding. I am very fussy about how peaches taste. Guess I was spoiled  growing up on a farm that raised a lot of them. We had a fairly large peach orchard for those days. I would say about 500 trees. Dad had the orchard layout designed so that the first few rows would be the earliest crop and ripen in the beginning of June. Other varieties would be ready to pick later and continue throughout the summer. By the time we reached September and early October, the last few rows were ready to harvest. To me, these were the best tasting of all, the juice ran with the first bite and while just a bit messy, the flavor could not be beaten. Mom had canned many a jar of peaches for the winter months and by now had quite a supply ready and waiting. With the last peach of the season, we knew that Fall had arrived and frost was not far away.

Jumping Rope at the One Room School

I was talking with my sister Peggy about our days at the one room school. One of the activities I described was the story of the "Windmill",  a winter game in the snow. As we recalled those times, our minds turned to another game not in my book. It was competitive Rope Jumping. To do this, a long rope was needed with a student at each end turning the rope. As many as four or five children would be the jumpers. A rhyme was used mostly to emphasize the rate of which the rope was turned. As the speed increased, the jumping students may have had to bend over and touch their toes or some other trick. In all cases the chant ended with the words salt and then pepper. At this point, the speed increased as fast as the rope could be turned. The last remaining student still jumping and who had not gotten caught in the rope was the winner.

My background in farming creates the opportunity for a presentation to an organization with which you may be associated. I am available to speak to groups such as: Future Farmers of America, 4-H, other agriculture clubs, school classes in American history, or any club that wishes to have a new and exciting program. Feel free to contact me in that regard at: tomdeimler@me.com

Read about farm life at: www.straightrows.com

Family farming meant everyone had an assigned task to do. My younger sister Peggy had the job of working in the house helping Grandmother Deimler. Together they kept it clean and prepared many of the meals. Meanwhile, Mom worked in the field or ran her produce peddle route in nearby Middletown. Peggy also was the backup for gathering the eggs and driving the tractor for bringing in hay or spraying the orchard. She had to be ready whenever needed. Working hard was something she truly knew.

We did have two tractors, the Farmall A and later the Crawler that I thought was a John Deere. My brother tells me it was a Oliver Cletrac and I agree completely. It was green, however, as is both Crawlers. The land we farmed was hilly and after a couple near turn overs of the Farmall, Dad decided to get something that was safer. Since we all drove the tractor at times, this was very important. The Oliver Cletrac had tracks that sat fairly wide and thus no chance for turning over. One very interesting note is that the tracks were all metal and as we drove, made a lot of noise with some neighbors a half mile away commenting about it. Pulling a hay wagon forward with the Oliver was easy, but backing a wagon up the incline to the second level of the barn took some real skill. I must admit my brother Bill was the best of all of us in performing that task.

We had a Farmall tractor 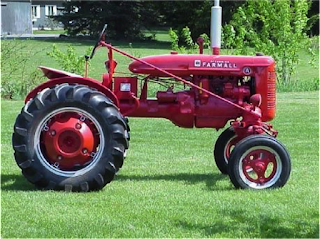 which we sold about the mid 1940's, when we got a caterpillar, a very small one. I think it was a John Deere like this: 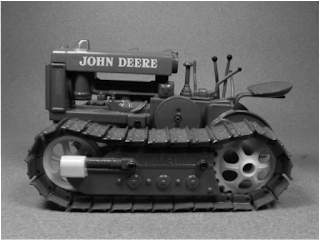 And this is a disc to toil soil: 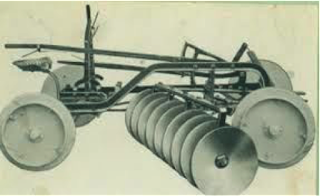 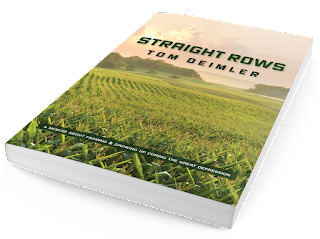 Farming at the end of the Great Depression was a community effort, and working hard was a way of life. My family cultivated the soil using largely antiquated equipment and existed with no modern conveniences in the home. The days were long, but the results were rewarding as we eked out a living for ourselves. The really wonderful aspect of it was that although we had very little, I never felt we were poor, and I never went to bed hungry. 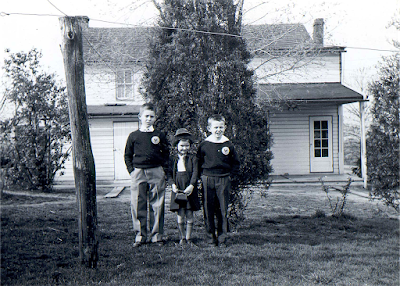 Straight Rows tells the story of my early days, from life as a boy in a one-room schoolhouse until I graduated from high school and went on to college. The experiences described in this book have defined who I am today. The lessons of the land were many and remain with me still. 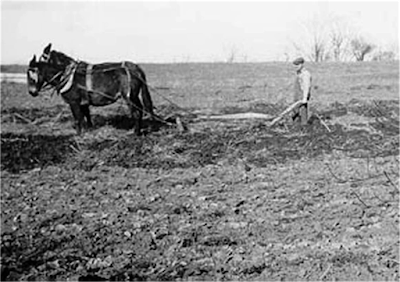